A few years ago, when I was in my senior year at the university, during the distributed systems lecture our professor asked us a very nice question:

If we were to choose between a fancy new programming language, or Java/C#, for a greenfield commercial project, what would we choose and why?

If you’re wondering what it has to do with distributed systems, I have to say - half of it was about software architecture.

The classroom was split into 2 camps, obviously. The fun and somewhat sad fact was that the Java camp won. I was part of that camp, even though I don’t like Java, to say the least. We had much better arguments. So, what were those winning arguments? Rich library and tooling ecosystem, and the relative availability of professionals in our local market, for a fair price too. Our professor deemed us project managers, not real programmers, then said we were right, and for a few seconds the atmosphere in the classroom turned sad and hopeless. Then we moved on with the lecture.

TL;DR: We all want to play with the shiniest new toys, but when money is at stake, better stick to something tried and true.

So here are some questions to keep in mind when choosing a programming language, or any software tool for that matter, for a project. The focus will be on commercial projects, but some of the tips work for research projects and simple pet projects too.

Initially, the decision-making process is usually guided by a very narrow understanding of the consequences of choosing a specific tool. In increasing order of maturity, here are some basic reasons to make a choice:

1 and 2 are only acceptable reasons for a pet project, with a small caveat, which I’ll explain later*. Although I would recommend sometimes taking a look at more niche, possibly peculiar tools to learn. Because, you know, if a language doesn’t change the way you think, it’s not worth learning.

4 is a decent reason, see Paul Graham’s post about using LISP to build a startup, but in the long run, it’s not that simple.

The difference between programming and getting stuff done, and software engineering is that the latter has significantly harder constraints (See Software Engineering at Google). Not just any code can be developed productively by a changing team of people and maintained over time. And most commercial software isn’t one-time scripts, but code that lives on for years, if not decades. To be a senior engineer, among other things, is also about making well-thought technical choices.

That’s why, when choosing a tool, language, or an entire stack, try to guide your decision-making with these questions, in no particular order:

Now we reached the final frontier. Until now, it wasn’t particularly hard to make a choice, you just had to do your research. But now, we’re gonna have to enter the realm of never-ending trade-offs. Keep in mind that software is written by people, who you have to employ, pay salaries, and ideally have a positive return on investment.

Rarely the raw performance of a tool or language is a big issue. Some domains are indeed interested in that characteristic too, like scientific computing, low-latency systems, and maybe embedded systems. More recently, how energy-efficient, or “green” a language or tool is, is of greater importance. Yes, I’m not kidding. For example Amazon cares about such things, although like all things at this level, it’s not so simple.

An example of picking a language

An important technical constraint for our project is that serverless technology is especially effective when the startup time of a serverless function is quick. If it’s not, why bother? Optionally, we might want to dive into serverless edge computing, meaning we need a programming language that can work even on resource-constrained devices. Maybe not microcontrollers, but something like a newer Raspberry Pi shouldn’t be considered unrealistic.

We are also budget-constrained because we’re a startup. We need to execute fast, or else we might not reach escape velocity, and no one will bother.

With that said, let’s prune some candidates. Because of our startup latency constraint, we can’t afford to run anything which needs a VM-like runtime. So no Java, C#, and even Erlang or Elixir. Although Erlang and Elixir have less substantial problems with VM cold start, they have another downside of having a smaller talent pool. On yet another hand, this talent pool is usually very enthusiastic and professional. I personally love Elixir, it’s just a pleasure to write, see why. What a shame we’re not building a messaging system.

If we are planning for maximum efficiency, maybe we should use C++? Definitely no. C++ is quite dangerous. Besides, we need to keep in mind that we want to develop fast and preferably without much risk of segmentation faults, resource leaks, and other C++ surprises. Btw, a good C++ dev is quite expensive and hard to find nowadays.

We know that development speed is important. But we also want a performant language without VM cold start problems. How about Python, or JS? These are popular, fast to work with, with a considerable talent pool, and JS can be speedy too. To be fair, this wouldn’t be the worst idea. Python, specifically CPython, can be slow but with the right tooling, or by substituting it with PyPy, we can solve these problems. As for JS, one issue is that the language is not the most pleasant to debug, with its unholy trinity of no-values and subpar traceback messages. Regretfully, there are lots of not-so-good-devs out there professing these tools, so that’s and issue. Finally, these are not the best systems programming languages.

Ok, so I said it, systems programming languages. And we dropped C++. What do we have left? Go, Rust, Crystal. We drop Crystal right away due to the lack of a sizeable community, talent pool, and libraries. So, it’s Go vs Rust? Hold on, there’s another contestant - OCaml. So, why did it come to these 3 languages? All of these are very suitable for systems programming, that is, interacting with lower-level OS constructs, are quite efficient at working closer to hardware, and in general, are fast and resource-efficient. Of all 3, Go is the most mainstream, so it’s a plus. Also, it’s easy to onboard people to use it. On the other hand, Rust and OCaml provide nicer guarantees for the programs you write, and although less popular, the quality of developers using them is usually pretty high. OCaml and Rust are pretty close idiomatically, but Rust syntax will be much more familiar to non-hardcore FP people, aka common folk, so it’s probably 10 points to Rust. All in all, let’s see the final table.

All things considered, probably the safest choice would be to use Go. And the next best thing would be Rust. A very good option would be PyPy, IMO. It’s almost 1 to 1 equivalent to CPython, but considerably faster. If you like it more hardcore FP, you could try OCaml. You could in fact go polyglot, and pick 2 languages, but don’t escalate to more than that. There’s a reason most full-stack engineers are writing JS-only.

*Time to discuss that caveat.

Yes, picking a tool only because it’s hot or seems interesting but is risky will rarely be a good idea, except when it is. You see, a tool is usually “hot” for a reason. Maybe it’s solving a common pain in the industry, and does so elegantly. Or maybe, it boosts productivity, efficiency, or the long-term maintainability of a system. Still, this isn’t enough to make such a risky move.

On the other hand, there’s an interesting aspect here. If a tool is hot people will want to work with it. This phenomenon boosts the desire to work for your team/business because you’re using this New Hot Thing ©. Combined with the intrinsic qualities of the new tool, it might make sense to actually give it a try. It is just as risky to never take a risk. Failing to grow and innovate will leave your business hard to hire for, your talent pool shrinking, and your operational efficiency slowly dying. 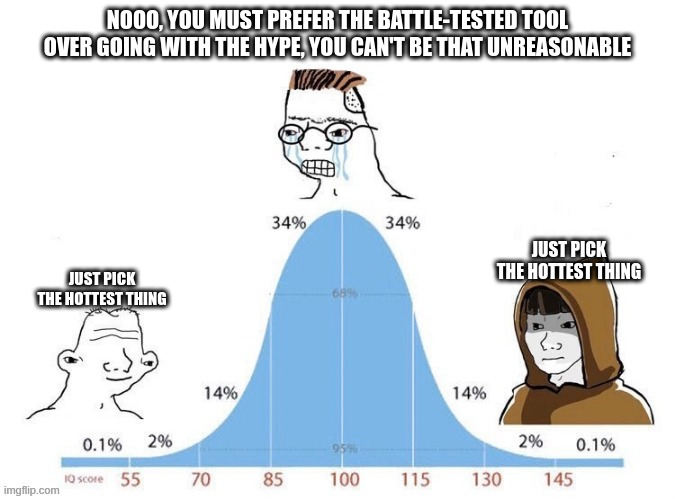 A substitute for a conclusion

I hope I haven’t fried your brains with this many things to consider. Even I sometimes don’t do the whole process, or am being sloppy when assessing some of the aspects. Still, having a checklist of things to consider is always a good thing, so I hope you’ll benefit from this.

Maybe a bit anti-climactic, but consider this - if you picked the wrong tool, it will rarely doom your project for failure. What will is not realizing you made a bad choice, and trying to fix it. Technical stacks are problems which can be fixed with money, and that’s a good thing.

Not the ending you expected? 😏

I should add a clarification about Java. Don’t get me wrong - I don’t “hate” Java, I just like pointing to its flaws, sometimes vehemently 😀. Java’s unnecessary verbosity is the main issue that I have with it. It wasn’t the only issue, but with the sped-up release cycle and a lot of ideas borrowed from other languages and communities, it’s becoming a better language. Brilliant engineers use Java for many important, actively developed projects with no plans to retire or rewrite these. Ergo, it can’t be an objectively “bad” language.

I came acros this amazing presentation. It’s still related to the arguments I propose, although putting a greater importance on the Basic Level > 3rd point decision factor. Even if initially the factor seems simplistic, there’s sophistication in simplicity, and the author of this presentation does a great job uncovering it. TL;DR, it’s good, on topic, and I recommend you check it out after reading my article 😀.

These posts were almost done since February, but due to the tragic events unfolding in Ukraine, I thought it wouldn’t be nice, to say the least, to post it back then. In Moldova, there’s a saying “Satu’ arde da baba sî chiaptănă” which translates to something like “The (unreasonable) old lady is grooming while the whole village burns”. I didn’t want to be that lady, so I thought it would be better to wait until things become at least somewhat less chaotic.